There are over 1700 species of bamboo. Bamboo flowering cycles happen in some but not all of the species. Bamboo has lots of uses, and it has been used for decades. Additionally, bamboo is the fastest-growing plant in the world. Have you ever seen bamboo flowering? Does bamboo flower at all? Let's get some answers in the next sections.

What Is The Bamboo Flowering Cycle?

Some diffferent species of bamboo can grow up to 72-feet tall. For most of their life, bamboo plants remain in the vegetative growth stage. When they flower, they flower sporadically at the same time. This is regardless of their geographical location. This mass flowering phenomenon is referred to as gregarious flowering.

There are many theories as to why mass flowering and consequent death of the plants happen to such an extent. Another interesting theory is that the mother plant dies to make space for seedlings. The time it takes the bamboo plants to flower differs between each bamboo species. Other species take 50 years, while other species take 32 years.

The short answer to the question: does bamboo flower? Is YES.

What Happens During Bamboo Flowering?

Depending on the species, growth environment, and general circumstance, there are only three types of flowering in bamboo, they are:

What does continuous flowering mean? Particular species flower year after year. This has no effect on the plant itself. Additionally, the seeds produced are usually not viable. They don't grow into new seedlings. In such plants, flowering occurs in different plants in the same forest at different times.

You can also find plants that have a one-year flowering cycle. This now happens to all the bamboo plants in the same forest. Furthermore, the flower production in a continuous flowering plant does not affect the plant itself or result in bamboo death, as with many other plants.

This is a very interesting flowering cycle. Why? Because it is as a result of environmental factors and not bamboo genetics. As the name seems to suggest, there is no perceived pattern. The flowering cycle happens to individual stems. Even if they are growing in a cluster, a few will sporadically flower, and the rest will not.

This is interesting because it is conditions such as drought or cold that will cause the flowering cycles to be triggered. Of course, this type of flowering in bamboo will not cause the sudden death of the plant. However, any seeds produced from this flowering cycles are not viable and will never become seedlings.

This type of cycle means that most species of woody bamboo flower at the same time. The flowering cycle happens regardless of the geographic location. Flowering usually happens between 3-150 years. After the flowering cycles are done, the bamboo plants die after a few years.

When certain bamboo species begin this type of flowering, they do so all over the world. Flowering periods can last for several years. For an entire forest to die after flowering, it can take multiple years. Additionally, some bamboo species will only die and fall off up to the stem. Rhizomes are then formed, and regeneration begins.

Unlike other types of flowering that are triggered by environmental factors, gregarious flowering happens by itself. Like some sort of alarm clock. Such flowering cycles are important in feeding rodent predators, and they also regulate animal populations. Before flowering, there is usually a drought which curbs the population.

During flowering, the rodent population can feast on the seeds to also curb the over-growth of the bamboo plants.

Bamboo flowering, especially among the woody species, is a rarity to witness because they take very long. However, other species that flower annually are the same as most other flowering species. So what are some of the impacts of bamboo flowering?

a) Renewal of Bamboo

Every plant has to flower and reproduce for the continuation of the species. As a result, bamboo plants are no different. Therefore after every flowering cycle, some bamboo species die, and others start growing. The death of existing bamboo plants leads to the renewal of the species because soon after, there is growth.

In China, Japan, and India, bamboo flowering occurs on a massive scale which brings about the beginning of the renewal stage. Furthermore, these flowerings cannot be stopped. This is because they have been around for thousands of years.

b) Loss of Building Material

Communities that survive around bamboo forests usually get a period where there are no plants to use for raw material. Instead, bamboo is used in construction and making other crafts. Additionally, the bamboo shoots are widely used for culinary processes. Unfortunately, this period usually leads to a loss of revenue.

After this remarkable plant dies en-masse, the remaining plants that die off create a huge pile of dry and easily flammable bio-mass. You guessed it right. It is very easy for a lightning strike around the bio-mass to start a large fire.

Whole forests and gardens can be razed down in a few hours by these fires.

If you have witnessed a forest fire, it is not the best thing for flora and fauna. The ecosystem in that specific place is compromised. However, not all is lost because sometimes this can mean that bamboo gets an advantage for the next generation. The fire clears out any competing species and lets bamboo flourish.

The flowering cycle brings about a large food source for rodents in terms of seed production. With food comes critters of all types. Mostly, rats and mice. An increase in food results to an increase in the rodent population. This can be awful because rats and mice carry diseases that are fatal to human communities within the area.

Bamboo seeds are not the only food source present in such areas. Rats also feast on the surrounding vegetation and cash crops such as corn. This results in massive losses and subsequent loss of revenue for the communities living nearby.

There are populations that are naturally reliant on bamboo for survival. For example, the giant panda that is indigenous to China has only evolved to eat bamboo. It is their staple diet. Without bamboo, Pandas will die. They are the only animal that eats bamboo. Human beings cannot eat bamboo, save for the shoots, which have to be specially prepared. 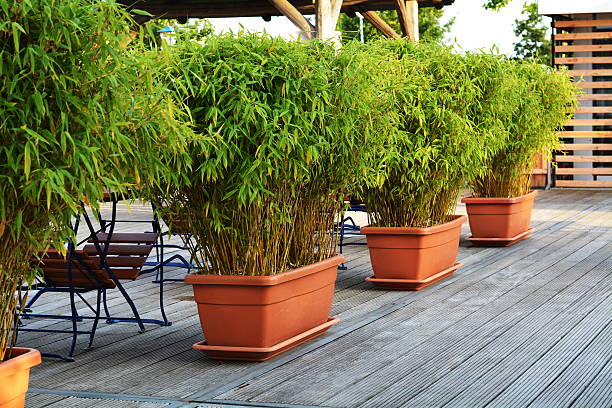 Of course, not all species of bamboo actually flower. They stay in a vegetative stage for the entirety of their lives. Other different species also don't die after flowering and go on to survive for long. Here are the eight species of flowering bamboo and their flowering patterns:

Berry bamboo goes into gregarious periodic flowering. It is a hybrid species that can reach heights of up to 25-meters. It is a clumping type of bamboo as well. It is a popular ornamental shrub plant because of its bright red berries and beautiful foliage color. Its berries are toxic to birds; however, humans can consume the shoots.

With gregarious flowering cycles, this bamboo species is grown for commercial uses. Its name is gotten from the unique shape of its internodes which resemble a tortoise shell. It can also reach impressive heights of 28-meters. It is also used for ornamental purposes because they are very interesting to look at.

This bamboo species undergoes gregarious flowering every few decades. Therefore, it has the potential to be very invasive and should be grown with care and spaced out. The ebony stems are beautiful, and they can reach heights of up to 30-meters. It is a tropical plant but can do well if taken indoors during winter.

This giant tropical species can grow to heights of up to 25-meters. It flowers sporadically, and its growth habit is clumping. It is used for light construction, and as the name suggests, it is native to China and Taiwan. When grown in the right conditions, its shoots are very sweet and edible.

As the name suggests, this species of bamboo is perfect for growing hedges. Additionally, it grows very dense. It is one of the shortest tall-bamboo varieties because it only achieves a maximum height of 15-meters. The plant has a gregarious flowering cycle as well. It is very low maintenance, and it grows very fast.

This clumping bamboo species flowers sporadically. It attains average heights of between 10-20-meters. Additionally, it is preferred because it tolerates a wide range of growing conditions. It is an excellent raw material for paper production as well as a range of crafting various objects. It can be planted as a hedge or planted to reduce erosion.

This species will experience either sporadic flowering or gregarious flowering. It forms dense clumps of very green leaves. It can achieve heights of up to 8-meters. It does well for hedging and architectural purposes. It is generally disease-free. However, slugs might damage some shoots. You can always prune them off.

The flowering cycle for this massive bamboo species is 130-years. They can reach staggering heights of between 25-70-meters. This species loves the sun and should be planted in very sunny conditions. They work well as hedges or screens for large areas. They are also very beautiful to look at and provide lots of shade.

Why Do Bamboos Die After Flowering?

Many theories have been advanced to support this phenomenon. Some are:

This hypothesis suggests that mass flowering increases the chances of survival for bamboo species. This hypothesis further argues that, by producing a surplus of fruit and seed, even if rats and rodents eat to their fill, there will still be enough left to repopulate. Having a longer flowering cycle than the life of predators also keeps predator numbers in check.

How does this work exactly? The mass flowering period causes starvation in the predators for as long as it takes to reach the next flowering stage. However, there are holes in this theory, the major one being why the flowering lifecycle of the plant is ten times longer than that of rodents.

The second hypothesis suggests that the flowering period takes too much energy from the plant. This causes the plant to lose too much energy, go into distress, so the plant actually dies. Interestingly, a particular species can flower and then die worldwide.

This interesting hypothesis suggests that after flowering and producing seeds, the mother plant actually dies to give space for new seedlings. Renewal and propagation of the species is preceded by the death of the mother plants.

Proven Methods and Tips on How to Grow Bamboo Successfully